Life may be a carnival, but at Sustainival you can’t “walk on water, drown in the sand or buy a watch real cheap,” as the song goes, but you can take the Green Beast challenge, learn about climate change, energy efficiency and renewable energy.

I’d heard about Sustainival for years and I’ve met co-founder Antoine Palmer before. But his own description of the carnival didn’t prepare me for the real deal. Before seeing Sustainival I was expecting to see a few kiddie rides and people sitting in small tents talking about the environment.

When I arrived at Sustainival in Edmonton, Alberta I was astonished at the scale of the event. The carnival covered the large park-like setting at the Servus credit union site across from South Edmonton Common. It featured a full-sized Ferris wheel, the Zipper, a Graviton loud carnival music, games, and all the smells and sounds of a full-sized carnival.

“We are the world’s first green carnival. Basically we have about a 2.5 acre midway here running entirely on renewable energy,” says Antoine Palmer, co-founder of Sustainival.

To illustrate the point, Palmer stands beside a large glass case full of canola seeds. “This silo represents 7,000 litres of canola seed which is a big part of the energy used to run this site. We run about one megawatt of power to run all of these rides and all of that is generated by renewable energy. Mostly waste vegetable oil converted into biodiesel so it’s a lot of power and a lot of fun,” says Palmer.

Sustainival the brainchild of Joey Hundert

“My partner, and the Founder of Sustainival, Joey Hundert, came to me one day and he said, “Biodiesel Gravitron,” laughed Palmer. “The idea is that if you can spin people in a large piece of equipment at three times the force of gravity, and demonstrate to them that this can all be powered through a renewable energy source, especially in that case a biodiesel made from a waste material, that that’s a compelling experience.”

When you are spinning at three times the force of gravity in a ride powered by energy generated from burning French fry oil “You walk away with renewable energy in your bones,” chuckled Palmer.

Sustainival is indeed a full-scale carnival complete with all the smells and sounds, but it’s also absolutely infused with environmental messages about building a sustainable future.

Kids are invited by the Green Beast mascot to solve a puzzle by collecting environmental factoids located around the carnival grounds. Questions like “Canada’s first commercial net-zero building, named the _______, was built in Edmonton.”

The answer of course is the Mosaic Centre, a 30,000 square foot office building that powered 100 per cent by solar energy and heated and cooled with a geothermal system.

The kids can win prizes, including a super cool electric powered drift bike, which is also one of the dozens of rides available.

Sustainival works with local partners such as the City of Edmonton to run Sustainival. They bring support, sustainability messages and education to carnival goers.

“This is an effort that brings the entire community together in one space to talk about sustainability,” says Heather Wheeliker of the City of Edmonton. She says the city is embracing sustainability in a way “we’ve never seen before” and that Sustainival is “a great way to engage with citizens.”

The City had displays on Edmonton’s amazing waste management system, they were giving away copies of their Green Home Guide and they were there talking to Edmontonians about climate change and energy transition.

There were also a dozen community and sustainability groups there including Sustain SU from the University of Alberta.

Sustainival got its start at the Freezing Man electronica festival in 2011 in Edmonton. “We brought four carnival rides to this Freezing Man concert, indoors at the Northlands Expo Center, and we powered them on biodiesel, and it was amazing. It basically made the show,” says Palmer.

The event was hosted by the Chamber of Commerce and armed with great feedback, and tons of media attention, Palmer and Hundert went on to produce 20 carnivals including events in B.C., Calgary, Fort McMurray and even Little Rock Arkansas.

This year Sustainival produced events in Lethbridge, Edmonton and Fort McMurray in Alberta.

Antoine Palmer grew up in Fort McMurray, Alberta and at 19-years-old left to spend five years as a practicing Hindu Monk. “I lived an extremely simple life. I realized that you can be completely fulfilled and happy without necessarily needing a ton of stuff.”

Then Palmer got interested in economics, community development and the whole idea of sustainability. “For me, it’s a design problem. It’s like, how do you meet everybody’s needs in a way that is complete, and whole, and sustainable? All the pieces had to fit together and work in harmony,” says Palmer.

Today Palmer is an entrepreneur, and Sustainival is still a big part of his portfolio and it just might be one of the most unique ways of engaging people in a conversation about sustainability that we’ve have ever seen.

Take a ride on the biodiesel powered Graviton, if you get the chance! 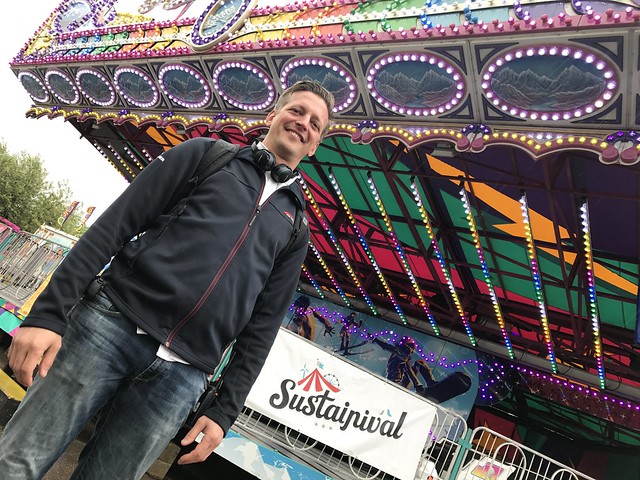