When the 70,000 fans of the Philadelphia Eagles fill the stands to cheer for their NFL team they do it at Lincoln Financial Field a stadium powered by 100 per cent renewable energy.

Even more impressive, 40 per cent of the electricity used in the stadium comes from 11,000 solar modules and 14 wind turbines mounted right on the stadium.

It all started in 2003 when Eagles owner Jeffrey Lurie and his then wife Christina Lurie (now Weiss Lurie) built Lincoln Financial Field. They wanted the stadium to be sustainable as possible. In 2013 the Eagles football team was award LEED certification for Lincoln Financial Field, only the second team to receive such a designation.

The visibility of the solar modules and wind turbines was all part of the Eagle’s plan to not only become more sustainable, but to demonstrate leadership and even become a trendsetter. This according to Norman Vossschulte, the Eagles director of fan experience in Philadelphia.

“The Philadelphia Eagles have such an influence,” says Vossschulte, “we also wanted do something, not only to give back, but do something to even set a trend and to make literally our planet a better place.” Ok, than may sound trite, but actions speak louder than words and the Eagles are serious about going green.

How do you green a stadium with such a massive footprint?

The Eagle’s “Go Green” initiative actually began with one simple step: “One of the simplest things was we put a blue bin under everyone’s desk,” says Vossschulte.

“And then from there, it really evolved very quickly. One of the next things we looked at was, ‘Hey, where does this paper that we use, for example, toilet paper or paper that we use in restrooms to dry your hands… Where does it come from?’” says Vossschulte.

It turns out the paper was coming from a forest with eagle habitat. “Well, we can’t use that,” says Vossschulte.

The Eagles are even recycling the cooking oil from all that fried good served up at football games. They make biofuel out of the used cooking oil and use it to power the maintenance equipment at the stadium.

Then there are beer cups, thousands of beer cups

You can imagine how many cups are used at a football game attended by 70,000 fans. “Back in the day we used plastic cups and they were all non-recyclable, then we switched to a recyclable plastic cup. But [there were] still literally, tens of thousands of plastic cups going out there,” says Vossschulte.

So the Eagles started serving beer right in the can. First they made sure it was safe, conducting throwing tests. No they didn’t use their young star quarterback Carson Wentz for the throwing tests, just regular guys, but “We did it and lo and behold our fans loved it not one can has been thrown to date,” says Vossschulte.

There’s money in those cans

Since 99 per cent of trash is diverted from landfills the Eagles need to find a way to sort their trash. As Vossschulte retells the thinking went like this “We’re going hire a bunch of people, and we’re going to rip open every single trash bag. And we’re going take out every aluminum can and, in fact since we’re already doing that, let’s also take out all the food scraps and everything and we’re going to send that to a composter. And everything we can recycle is now sorted by about 60 people on any event day.”

In their old system the Eagles would get about $75 a ton for their aluminum cans. By doing it themselves they are now stockpiling bales of squashed aluminum cans and selling them when the price of aluminum peaks, between $800 and $1,400 per ton! Proceeds pay for green initiatives and for incentives to employees.

The Eagles recently added a full-scale composter to process organic wastes at the stadium. The composter puts the digested organics into the municipal waste water system which some researchers worry could cause nutrient loading of water ways, but the system helps the stadium divert 99 per cent of its waste.

Saving money is cool too

Largest solar system in the NFL

They achieved this by entering into an agreement with American Energy Company NRG.  The company helped the Eagles install 11,000 solar modules and 14 wind turbines on Lincoln Financial Field. The 3.1 megawatt system produces 40 per cent of the electricity used by the stadium each year. When they produce too much solar electricity it is sold to NRG and when they need more electricity they buy green energy back at a discount.

The staff of the Eagles have looked everywhere for ideas. “And the cool thing about Christina and Jeffrey (owners) is they really inspire and empower us all to be more sustainable. You don’t ever hear, ‘Oh, well, how much is that going to cost?’ That’s never the first thing that’s being asked,” says Vossschulte.

The Eagles owners wanted to demonstrate visible leadership in sports and in their home town of Philadelphia–there’s nothing quite like 14 wind turbines and 11,000 solar modules to catch people’s attention at the stadium and on TV.

And other sports teams are following suit. Of 126 pro teams in five major sports, 38 now use renewable energy. 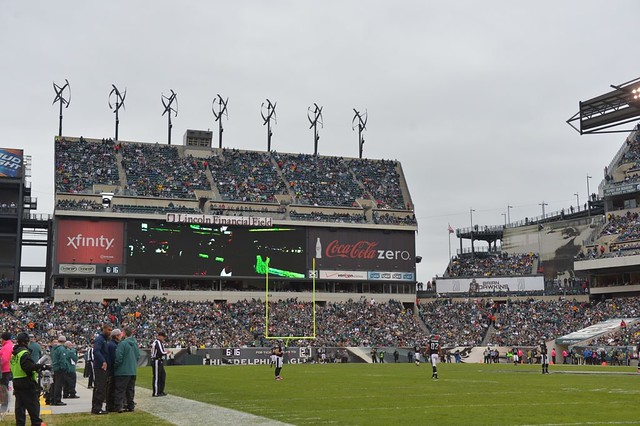