Turn down the lights, crank up the music

Joni Mitchell, David Byrne, k.d. lang, Joan Armatrading, Passenger, Michael Franti, Blue Rodeo, John Hiatt, Elvis Costello—after attending the Edmonton Folk Music Festival for 22 years, I have seen more cool music there than I have elsewhere in my entire life. It’s not the place I was expecting to find an innovative story about energy efficiency.

But recently, as I gave a talk on renewable energy and energy efficiency at a special town hall event hosted by Marlin Schmidt, the Minister of Advanced Education, this guy with a folk festival jacket came up to me and said “Hi, I’m Jeff Cruickshank. Want to hear a cool story about energy efficiency at the Edmonton Folk Music Festival?”

Jeff has been attending the Edmonton Folk Music Festival for all of its 36 years. An electrician by trade, he started volunteering for the festival six years ago. He’s now a site coordinator for the electrical crew and one of more than 2,000 volunteers who make the festival such a success.
Jeff’s a bit of a green-energy nerd, like me (we’re both the kind of person one tends to meet at a Friday night talk about energy efficiency).

After musing about the folk fest’s lighting systems for the past few years, he came up with an idea to slash the amount of energy the festival uses to light all of its tents. Not only that, his new system is so simple it will save more than 500 hours of volunteer labour during the annual setup.

We’re not talking about stage lights, but all of the other lights in tents all over the huge, amazing hillside site in Edmonton’s Gallagher Park.

Ok, so how much better are these LEDs than the old halogen lights?

“We’ve replaced or installed about 202 lights. And the total wattage that we’re replacing is approximately 175,000 watts, and we’ve managed to take that total down to a little over 5,300 watts,” says Jeff.
Ok this sounds a little over the top, but Cruickshank is now using less than four per cent of the wattage he was using previously to light the tents.

If Jeff had done this for a commercial operation that had their lights on 12 hours a day instead of for the folk festival that runs for only four days, the payback in energy savings would take just 4.5 to 5 months.

For an operation that sets up and tears down every year, Jeff’s new system has an even bigger impact on labour efficiency. It’s not just the lights Jeff has changed; he also designed a light box, a hanging light switch and used only two designs for every fixture on the site.

All of the specially designed wooden fixtures fit into large boxes on pallets—a system so streamlined and efficient it will save more than 500 hours in volunteer time every year.

Jeff shares the credit with dozens of the other volunteers he works with at the festival. “It was through a tremendous amount of effort by our site crew volunteers; carpenters, labourers, painters, everybody that came together to make this happen. It’s certainly not just one person. That’s a given. We’ve had as many as 25 people at a time working on a Saturday or Tuesday night since January to make this happen,” says Jeff.

All this up-front investment will pay off with a more energy- and labour-efficient festival for years to come.

It will be a safer festival, too. Until now volunteers had to unplug extension cords to turn off the lights—a dangerous task in a rain storm—so Jeff designed a hanging light switch, complete with a little shelf where volunteers can charge their phones.

“It’s a way we’re able to show our volunteers that they’re important to us and it allows us to give back to them. Because they’re often there 10, 12, 14 hours a day during the festival, and in this day and age, to expect them to go without their devices really isn’t viable,” says Jeff.

Jeff’s a 36-year veteran of the Edmonton Folk Festival, so I had to ask him to name his favourite moments from over the years.

“I would have to say Blue Rodeo a few years back for the Mud Fest. Loreena McKennitt, playing against an absolutely dazzling lightning storm as her backdrop. And then, more recently, Passenger. Mike Rosenberg, I believe is his name, put on an absolutely fantastic show,” says Jeff.

Passenger did indeed put on an awesome show last year, as did Nathaniel Rateliff & the Night Sweats and 62 other acts.

See you under the super-energy-efficient LED lights at this year’s festival. 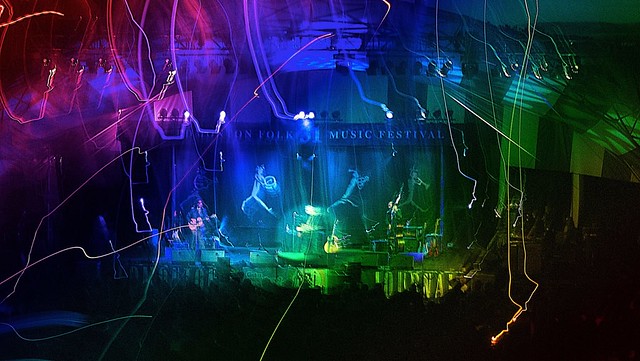